If you stay at a private treehouse or at a tree house hotel, what really counts is not just how it looks from the outside, but whether its interior design is up to your standards. Luckily, these 5 treehouses and tree house hotel below hold what they promise.

Their makers haven`t stopped their creative process at the shell of the treehouse but created one of a kind pieces of art, from the in- and outside. They have tackled the challenge of restricted space with smart solutions and put modern design into a new context. Here is our pick of the 5 best treehouse and tree house hotel interiors featuring modern architecture and design. 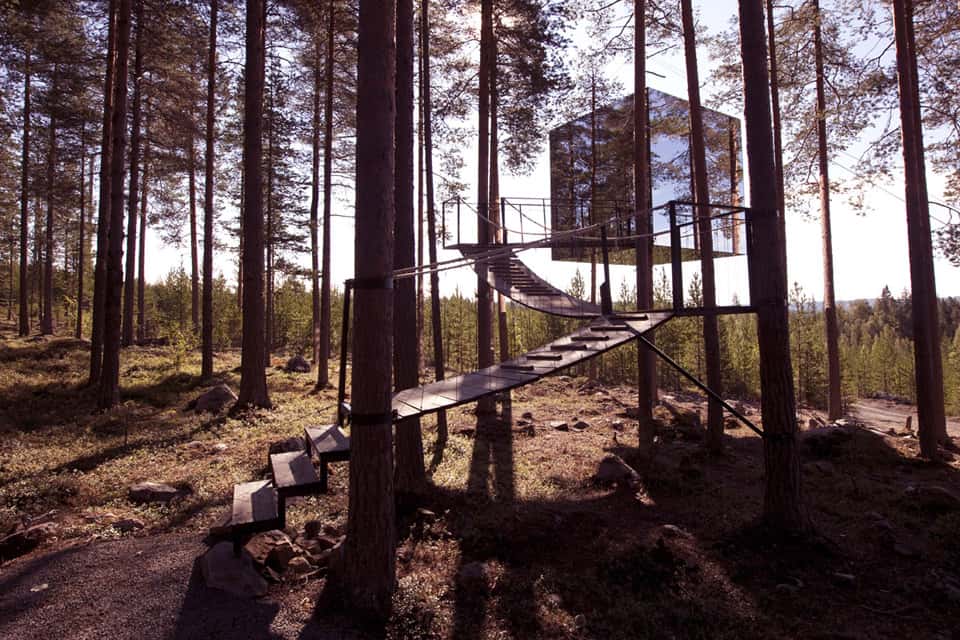 The Mirrorcube is one of the most widely known avant-garde tree houses hotel around the world. Most people cannot help but feel instantly impressed by its unique design. This is often followed by a big question mark: “But how does this treehouse look in the inside?” Well, here you go:

The Mirrorcube tree house hotel features minimalist interior design using natural materials. The light wood used for both the flooring and the walls of this tree house hotel creates a zen atmosphere which does not distract attention from the beautiful nature surrounding the tree house resort.

Unlike how it looks from the outside, the mirrorcube tree house hotel actually has large windows that allow you to observe the forest around you while remaining invisible to the outside.

This little private treehouse is a one-man project by Geoff de Ruiter that deserves attention for both the exterior and the modern, self-made interior design. The Raven Loft, 17 feet (5 metres) off the ground, is covered by traditional wooden shingles that blend in perfectly with the forest around it. 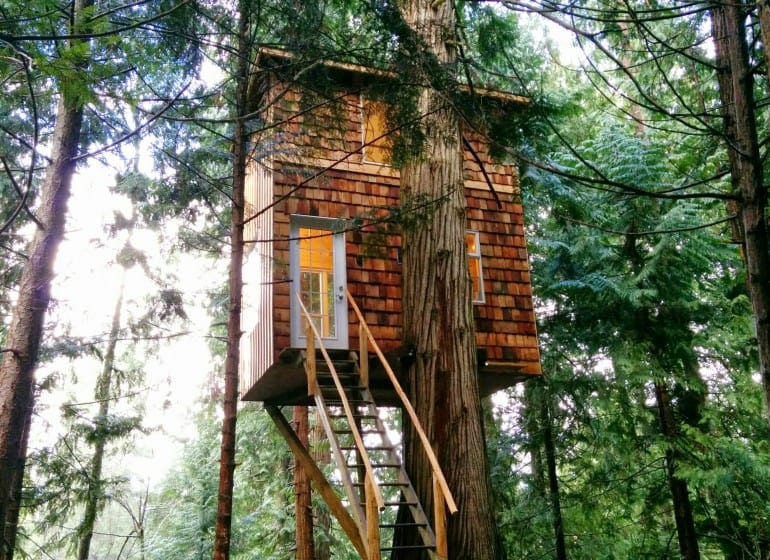 Inside, the treehouse features smart and functional interior design. De Ruiter made most of it himself or used items he found or owned already. There are smart storage solutions, self-made water supply, a kitchen and even a composting toilet.

The best way to discover the interior of this treehouse, is to be shown around by de Ruiter himself in this video.

The charming 18th-century Italian farm la Piantata tree house hotel features two treehouses on its property. The so-called Black Cabin appears like a rustic treehouse cabin from the outside, but once you are inside, you might forget you are in a treehouse. 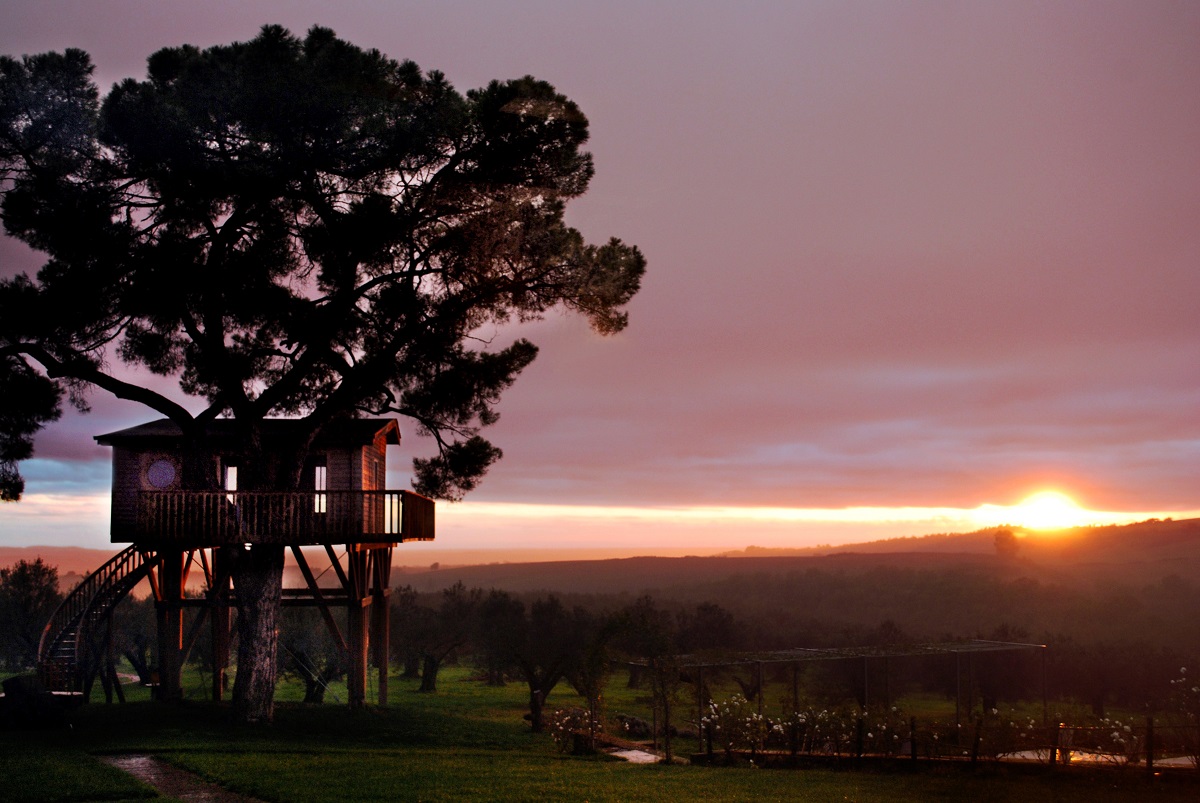 The Black Cabin is more than `just` a treehouse. It is a 87 square metres luxurious high-tech tree house hotel. A king-size bed and top-end amenities make it the perfect honeymoon location. If you use the retro-style telescope, you will have stunning views over olive groves and lavender hills.

This private treehouse, built by Lukasz Kos, floats like a Japanese lantern on stilts within the fir trees around Lake Muskoka. The 4treehouse extends upwards instead of occupying larger space at only one level. Built on three storeys, this treehouse offers between 300-500 square metres of multi-functional living space. 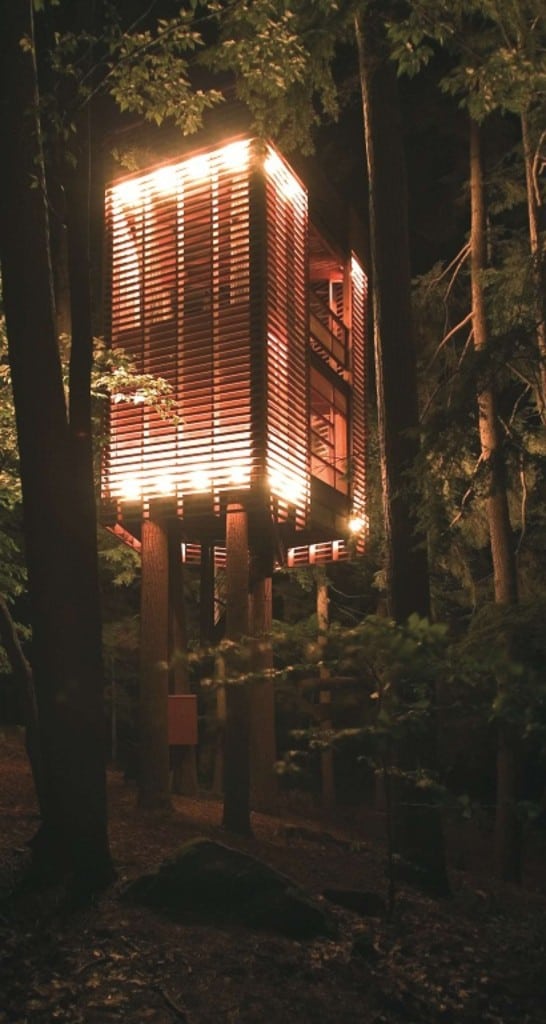 The interior of this multi-storey treehouse is lit by varying levels of natural light, passing through the wooden grid that covers the outside of the structure. Its special feature is  a suspended patio with a “sky ceiling”. At night, the treehouse looks like a lantern – an impression that is further enhanced by its bright red floor when you are inside.

This tree house hotel features four cabins on stilts with a design developed by Baumraum that represents an unusual contrast to the architecture common in this region. While the weight of the cabins is distributed over a dozen stilts made of steel, each of the treehouses’ terraces is suspended from a tree.

The interior of this tree house hotel is entirely covered by wooden boards which enhances the treehouse-feel and provides a slightly rustic touch. This is balanced by the timeless design furniture that gives a modern feel to the cabins.